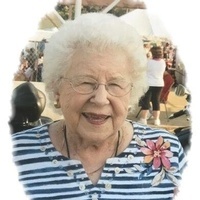 Mrs. Mary Virginia Stigall, age 94 of Camden, TN passed away on Tuesday, February 5, 2019 at Rosestone Retirement Community in Paris, TN. Mrs. Stigall was born on June 26, 1924 in Camden, TN. to the late Clarence Hudson and Bertha Johnson Hudson. She was also preceded in death by her husband, Harrell Martin Stigall and sisters, Alice Jean Hudson and Betty Jo Hudson. Mrs. Stigall was a retired Teller with the Bank of Camden where she was employed for 41 years. She was an active member of the First United Methodist Church in Camden for many years, where she served on various committees and was a member of the United Methodist Women and enjoyed working with the Methodist Thrift Shop. She was an active member and Treasurer for the American Cancer Society, Charter member of Camden BPW Club and selected BPW Woman of the year in 2004.

Funeral Services will be held on Friday, February 8, 2019 at 2 PM at the Oakdale Funeral Home Chapel with Bro. Steve Whitworth and Bro. Justin Raymer officiating. Burial will follow in Camden City Cemetery.

In Lieu of flowers please make donations to the American Cancer Society, First United Methodist Church or the charity of your choice.

To order memorial trees or send flowers to the family in memory of Virginia Stigall, please visit our flower store.