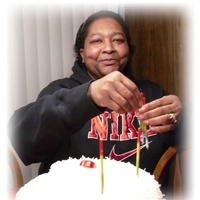 Tina, as she is affectionately called by her family and friends, age 59 of Springville, TN, transitioned to Heaven on December 23, 2018 at Henry County Medical Center.  Tina was born on February 6, 1959 to Delia Mae Tharpe of Camden, TN.  She was preceded in death by her grandmother, Oanna Bomar, Uncles – Roger Bomar, Otha Bomar, and James Edward Tharpe, Aunt – Jessie Faye Ray, Niece – Angel Tharpe, and Brother-in-Law, Bobby Dunlap.  Tina was a member of Abundant Life Christian Center in Hollow Rock, TN where she attended regularly and served under the leadership of  Pastor James E. Nesbitt.

Tina worked for many years as a caregiver at Cornerstone in Camden, TN.  She was a devoted wife, mother, sister, aunt and friend.  She is survived by her husband Jimmy Dunlap of Springfield, TN, two sons -

She leaves behind a host of cousins, other relatives and friends. She will be missed by all.

Funeral Services will be held on Saturday, December 29, 2018 at 1 PM at the Oakdale Funeral Home Chapel with Bishop Jack L. Bomar officiating. Burial will follow in the Calvery Cemetery.

To order memorial trees or send flowers to the family in memory of Valentina "Tina" Dunlap, please visit our flower store.