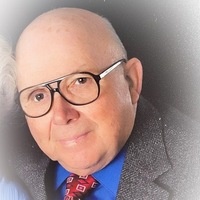 Reverend Thomas Earl (Ted) Duffey went home to his Savior on Wednesday, November 24, 2021 at the age of 92.

Ted was born on June 24, 1929 in Humboldt, TN to James Simeon and Jesse Leigh Yeates Duffey. His family moved to Brownsville, TN where he grew up on the farm. Ted answered the Lord’s call to preach the gospel and attended Union University in Jackson, TN as a ministerial student. He met the love of his life, Myrna Ethlyn Barnes at Union when, as an upper classman, he was assigned to help Myrna make out her schedule of classes for her freshmen year. They married on Good Friday, April 19, 1957. After graduation from Union University, Ted and Myrna moved to North Carolina where he attended Southeastern Baptist Seminary in Wake Forest, North Carolina while pastoring local churches.

Ted and Myrna moved back to Benton County in 1970, where they both taught in the local school system. Ted went on to earn his Masters in Education while teaching and continuing to pastor nearby churches. Ted and Myrna raised one daughter, Donya, and three sons, Tom, Jon and Joe Ben.

Ted loved people, and enjoyed his many years pastoring churches, teaching school, and serving as guidance counselor at Camden Central High. He never lost his love for the farm and farm animals. He spent many days on his 30 acres of land, raising cows, hogs, chickens, horses, and the occasional goat.

Ted was also a prolific poet and writer. He wrote the “On the Go” article for the Camden Chronicle for many years. He enjoyed composing poems for his coworkers and family members.

Ted had a great love for music. He and Myrna sang at many funerals and weddings throughout their more than sixty years of ministry.

Graveside services will be held on Sunday, November 28, 2021 at 3 pm at Camden City Cemetery with Bro. Jason Moore officiating.

To order memorial trees or send flowers to the family in memory of Thomas "Ted" Earl Duffey, please visit our flower store.