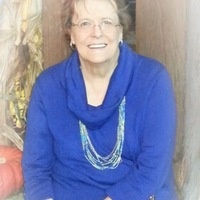 Sandra Lynn Lashlee Rogers passed away at her home near Camden on March 16, 2022. She was surrounded by her loving children who lived nearby with the exception of her son Bryan in Alaska, and Brett who is currently deployed abroad in Africa. She has been battling congestive heart failure for several years which was the cause of death.

Sandy was born September 27, 1941 in Dunsmuir, California to Alton "Red" Haggerty and Margaret Rose MacAulay Haggerty. She was raised in Dunsmuir with her older sister Patricia and younger brother Butch. After her parents’ divorce, she was adopted by her step-father William Carsey Gatlin of Paris, Tennessee who was a returning Navy Seabee from World War 2 who met her mother in San Francisco. In the later 1940's, Sandy moved with her family to Paris, Tennessee where she would later become a standout basketball star for E.W. Grove High School in Paris as well as a renowned equestrian rider having participated in many fox hunts and barrel racing events. Her senior year of high school she met Camden native Frank P. Lashlee married in 1958, having turned down a full scholarship to Draughon's College who were the National Champions in their respective division of women's basketball.

Sandy and Frank moved to the Nashville area in the early 1960's and raised children Frank Jr, Bridgette (Bea), Brett, Bryan and Patricia, moving back to Camden in 1971. Sandy would work as a substitute teacher in Benton County, as well as a bookkeeper at Commerce Union Bank, but mainly considered herself a housewife and enjoying raising her kids. With rambunctious, active children around her, this meant she spent much of her time running to numerous school sporting events and being pretty much everyone's second mother ranging over numerous grades her children were in. She was considered one of Camden's best bridge, canasta, pinochle, and any kind of card game one could think of. Crossword puzzles she could do in her sleep. This adventurous spirit would take her to Alaska in 1985 where she lived 25 years with husband Stanley Rogers, also a Camden native. Sandy was a deadly shot when it came to big-game hunting! Locally she was known as one of the best "wild-game cooks'' in Benton County! She loved the rough country and historic sites when traveling, with an affection for her ancestral homelands of Ireland and Scotland and found genealogy as her favorite hobby over the past couple of decades.

After her husband's death in 2011, Sandy moved back to Camden where she would reside until her death. She taught her children to always be polite, mannerly, show class as well as tact, to be patient and compassionate, and to love your family and others unconditionally. She rarely if ever spoke a harsh or degrading word about or to anyone in her lifetime.

Sandy will have a Celebration of Life April 16 (time & location pending) and her ashes interred at Maplewood Cemetery in Paris, Tennessee at the Gatlin Angel Family Plot.

To order memorial trees or send flowers to the family in memory of Sandra Lynn Lashlee Rogers, please visit our flower store.