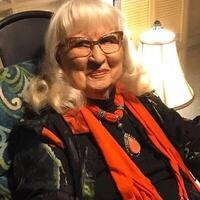 Patricia Carlene Price was born on September 13, 1919 to Steven and Ethel Parkerson in Greenville, MS. She went to be with the Lord on Tuesday, February 1, 2022.  At 102 years old, she was preceded in death by her parents, three brothers, Otto, Roscoe and Johnny Parkerson, her son, Billy E. Thomas and her husband, Jerome Arlen Price. She was also preceded in death by two precious great grandchildren, Conner Allan Fuqua and Karder Lee Neal.

Patricia lived a full and vibrant life that included her two daughters, Judith Price Parra of Memphis, TN and Sharon Lea Price of Camden, TN.  Prior to moving to Camden with her husband Jerry, she lived in Germany near her son who was stationed there in the Army.  She often spoke of her time there and traveling around Europe.  One of her favorite memories was seeing the Tulips bloom in Holland.  She started teaching her daughter Sharon to speak German when she was just three years old.  Even in the last few days she was speaking a little German to her and the nurses.  She worked in Photography, Jewelry and Fashion which included modeling in her younger years.  After moving to Camden, she became a devoted Wife, Mother and Grandmother for the next 65 years.  She was a member of the Camden Chapter of the Order of the Eastern Star of which she was very proud and Eva Baptist Church for the past 53 years.  She loved all wildlife but especially birds!  She spent many hours sitting at her kitchen table studying them and could name everyone she saw!  Her laugh was known to many and once she started laughing, she could not stop!  She did not learn to drive until she was 42 years old and continued to drive into her 90’s.  She was a very strong and loving person to all who knew her. Her grandchildren loving referred to her as Moo Moo.  She loved it even though we never quite figured out how she got that name.

Graveside services will be held on Friday, February 4, 2022 at 1 pm at Flatwoods Cemetery in Camden, TN.

To order memorial trees or send flowers to the family in memory of Patricia Price, please visit our flower store.