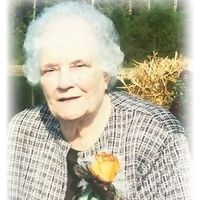 Mrs. Maxine Hawley, age 88 of Camden, TN passed away on Wednesday, September 25, 2019 at Camden Healthcare & Rehabilitation. Mrs. Hawley was born on March 12, 1931 in Big Sandy, TN to the late Mackie Brewer and Florence Redden Brewer. She was also preceded in death by her husband Everett Nixie Hawley; brother Tommy Brewer; sister Joann Brewer.  Mrs. Hawley was a retired cook with Camden General Hospital and attended the Church of God of Prophecy.

Funeral services will be held on Sunday, September 29, 2019 at 2 pm at the Oakdale Funeral Home Chapel with Bro. Mikie Yates officiating. Burial will follow in the McRaes Chapel Cemetery in Big Sandy, TN.

To order memorial trees or send flowers to the family in memory of Maxine Hawley, please visit our flower store.