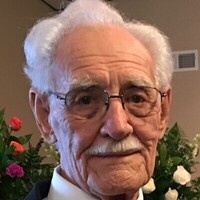 Rev. Lloyd Daniel Davis, age 94, formerly of Camden passed away on Thursday, April 22, 2021 in Murfreesboro, TN, at the home of his daughter.  He was born on December 28, 1926, to the late Elvis Columbus and Mary Flossie Williamson Davis, in Lenox, TN. He was also preceded in death by his wife; Janie Faye Haddock Davis, infant son; Lloyd Daniel Davis, Jr., son; Stevin Eldon Davis, a brother; Joe Davis, sisters; Arsula Gibson and Gertrude Durham.  Rev. Davis was a United State Army Veteran and pastored many churches in the Church of God of Prophecy, starting in 1950, with his first church in Tracy City, TN.  He began preaching in his twenties and his pastorates lasted for 60 plus years.  He liked fishing with his family and friends; he was thirsty for knowledge, a life learner.  He was also an avid reader and continued that practice days before his move to Heaven.

Graveside services will be Sunday at 2 PM, at Dyer County Memorial Gardens, in Dyersburg, TN, with Bro. Troy Redmond officiating.

To order memorial trees or send flowers to the family in memory of Lloyd Daniel Davis, please visit our flower store.