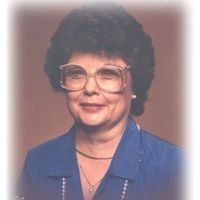 Mrs. Linnie Brewer Farrar, age 88 of Camden, TN passed away on Monday, September 23, 2019 at Maplewood Healthcare.  Mrs. Farrar was born on March 12, 1931 in Faxon, TN to the late Robert Brewer and Allie Berry Brewer.  She was also preceded in death by her husband Wesley Hulon Farrar; son Robert Walter “Dub” Farrar; brother Raymond Brewer; sisters Ruby Hollingsworth and Reba Fields. Mrs. Farrar was a member of the First Baptist Church in Camden. In 1974 she became the first Senior Citizens Director for the Benton County Senior Center where she guided it with tremendous dedication and love for twenty two years.

Funeral Services will be held on Saturday, September 28, 2019 at 11 am at the Oakdale Funeral Home Chapel with Bro. Jim Austin and Dr. Mike Blankenship officiating. Burial will follow in the Benton Memory Gardens.

To order memorial trees or send flowers to the family in memory of Linnie Brewer Farrar, please visit our flower store.