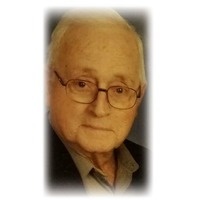 James “Jim” Louis Latendresse, 90, of Camden passed away Thursday, November 28, at home in Camden surrounded by his family. Visitation will be held at Oakdale Funeral Home on Thursday, December 5, 2019 from 4-7pm with a rosary starting at 7pm. A mass of Christian burial will be at 1pm on Friday, December 6, at St. Mary’s Catholic Church in Camden.

Mr. Latendresse was born December 16, 1928 in Beresford, South Dakota to the late Olga and John Latendresse. James married Irene Bickett on May 8, 1950 and moved to Camden, Tennessee in 1960. He was a retired Navy man, commercial fisherman, carpenter, and taught building trade at the Vocational School in Camden. He was an avid outdoorsman who loved to hunt and fish.

In addition to his parents he was proceeded in death by his brothers David, John, Harold, and Donald Latendresse.

The family asks in lieu of flowers, contributions may be made to the Benton County Ministerial Alliance, Food Pantry.

To order memorial trees or send flowers to the family in memory of James Louis Latendresse, please visit our flower store.