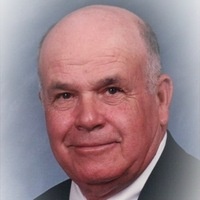 Jackie was a member and deacon of Cross Roads Missionary Baptist Church, serving in many capacities throughout the years, including Sunday School Superintendent and as a member of the building committee.

Mr. Wimberly partnered with his brother-in-law Darel Smothers to start and grow S & W Pallet Co. Inc. into a company employing as many as 88 people at one time. Previously, he worked as a supervisor at Genesco Shoe Company.

Mr. Wimberly enjoyed working in the cattle operation he ran with his son, but the biggest joy in his life was watching the antics of his grandchildren and great grandchildren. With family gatherings numbering into the 30’s, he often commented that he didn’t need any presents, just to be in the presence of his family.

To order memorial trees or send flowers to the family in memory of Jackie Ferman Wimberly, please visit our flower store.