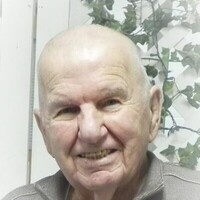 Herbert B. Camp, 96, formerly of Camden Tn. passed away on Friday, September 2, 2022 at Anna Mae Owens Hospice House in Murray, KY.  Herbert was born in Holladay, TN to the late Bud C. Camp and Mary Ella Prince Camp on February 18, 1926.  He was proceeded in death by Hazel Lovell Herndon Camp, his wife of 58 years and his brothers Roy Camp, Willard Camp and sister Lorene Espenscheid Adams.

Herb enjoyed visiting people in Health Care facilities, calling friends, family and members of First Baptist Church on their birthdays. He was an avid golfer and enjoyed being on the golf course.  He was known as the “Golf Cart Man”.  He loved working on, selling and trading golf carts.  He was also the “Mole Man” on North Forrest Ave.  It was a mission for him to rid his yard and his neighbor’s yards of moles.

Herb was a veteran of WWII and the Korean War.  He was a member and Deacon Emeritus of the First Baptist Church, Camden, Tn., a retired Safety Engineer for TVA.  A member of Magic Valley Golf Club Association, BPOE Elks Lodge, VFW, American Legion.  After the death of Rep. William Herndon (Herb’s Brother-in-law), he served the remainder of Rep. Herndon’s term as a Tennessee State Representative for the 74th Legislative District.

The family request in lieu of flowers, donations be made in Herbert’s memory to the Music Department at First Baptist Church, 269 Post Oak Ave., Camden, TN 38320.

To order memorial trees or send flowers to the family in memory of Herbert B Camp, please visit our flower store.