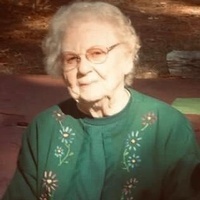 Mrs. Helen Willis Terry, age 98 formerly of Camden, TN passed away on October 27, 2018. Mrs. Terry was born on October 13, 1920 in Rutherford, TN to the late Fronie and Almus Willis. She was also preceded in death by her husband, George Terry and son in law, Randy Jones. Mrs. Terry was a former owner and operator of Benton Cleaners and a member of the First Baptist Church in Camden.

The family wishes to thank Hospice of Limestone County (Athens, AL) for their loving care as well as a special thank you to Charla for her constant care and concern.

Graveside services will be held on Wednesday, October 31, 2018 at 9 am at the Camden City Cemetery with Dr. Mike Blankenship officiating.

To order memorial trees or send flowers to the family in memory of Helen Terry, please visit our flower store.