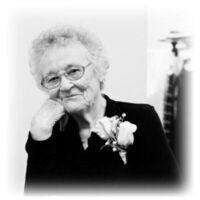 Mrs. Earnestine Higdon, age 90 of Camden, TN passed away on Tuesday, May 5, 2020 at Camden Healthcare & Rehabilitation Center. Mrs. Higdon was born on October 3, 1929 in Benton County to the late Edd Allen and Buron May Smothers Allen. She was also preceded in death by her husband Rev. James Higdon; infant son Johnny Ray Higdon, son David Higdon; brothers Milburn Allen and Abbott Dwayne Allen. She was retired from Higdon’s Greenhouse and Florist and a longtime member of Center Point Missionary Baptist Church. She also worked many years as a seamstress with H.I.S.

Private graveside services will be held on Thursday, May 7, 2020 at Pleasant Hill Cemetery with Bro. Chad Hamilton officiating.

To order memorial trees or send flowers to the family in memory of Earnestine Higdon, please visit our flower store.