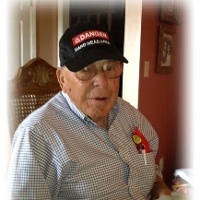 Mr. D.M. “Shorty” Wright, age 93 of Camden, TN passed away on Tuesday, June 25, 2019 at his residence.  Mr. Wright was born on July 30, 1925 in Benton County to the late Ether Wright and Beulah Stepp Wright.  He was also preceded in death by his brothers, Eron Wright, Hillman Wright, Tommy Wright, Charles Wright and a sister Katharine Gregson. Mr. Wright was a retired Benton County Tax Assessor, a former County Commissioner, City of Camden Alderman and owned Shorty’s Grocery for many years. A big baseball fan, he was Little League and Babe Ruth manager and a charter member of the Tennessee Senior Babe Ruth League. Memberships include Natchez Trace Baptist Church, the VFW, American Legion and Camden Masonic Lodge 179. Mr. Wright was proud to have served in the U.S. Army during WWII and was part of the Occupation Force of Japan.

Many Nieces and Nephews

Funeral Services will be held on Saturday, June 29, 2019 at 11 AM at the Oakdale Funeral Home Chapel with Bro. Greg Stanford and Bro. Steve Douglas officiating. Burial will follow in the Flatwoods Cemetery in Holladay, TN.

In lieu of flowers donations can be made to the Natchez Trace Baptist Church.

To order memorial trees or send flowers to the family in memory of Shorty Wright, please visit our flower store.