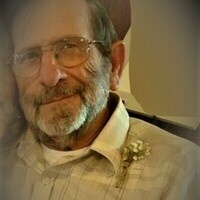 Mr. Joseph David Rayburn was born December 26, 1938.  He was born, raised, and lived in the Crossroads community for 84 years, where he knew every hill, hollow, and covey of quail.  He was a member of Crossroads Missionary Baptist Church.  He often said that he went to Crossroads University until the 6th grade, when he decided he had learned all he needed to know. He married the late Delana (Jordan) Rayburn on November 28, 1959.

You could find him in the shop piddling, in the gazebo at noon waiting for Memomma to get up, or sitting on a bucket just watching the rain.  He could call up a bobwhite quail just by whistling and talk just like Daffy Duck.  He made shadow puppets on the wall, and his breakfast was better than Memomma’s.  He watched cartoons on Saturday mornings and drove an old truck that shifted on the column.  He whittled arrowheads from pine bark, tiny bats and baseballs, wooden spoons, and walking sticks.  He sharpened the neighbor’s chainsaws and all of the knives in the kitchen.  He painted everyone’s houses.  He made the best fried cornbread, salmon patties, and coffee.  He loved to hunt quail, his garden, soft peppermint candy, and Memomma.  He taught us to hunt for wicker-whack worms, paint walls, cut a 45 in the trim, and love unconditionally.  He never said an ugly word, and never once told a short story.

Grandaddy entered into Heaven the morning of Saturday, September 10, 2022 at his home, surrounded by his family.  Upon his arrival, there was a happy and long-awaited reunion with those who preceded him in death.  His parents Riley and Sarah (Mitchell) Rayburn, brothers Freman, Jabo, Mitchell, and sisters Opal, Georgia, and Christine, wife Delana, pets Homey and  Sport, and a host of bird dogs and old friends.

He is survived by his precious sister, Katherine, who he called Bea.  Also surviving are his children Tammy (Buck) Carter and Steve (Wendy) Rayburn.

Funeral Services will be held on Monday, September 12, 2022 at 11 am at the Crossroads Missionary Baptist Church with Bro. Arzell Douglas and Bro. Derrick Jowers officiating. Burial will follow in the Crossroads Cemetery.

To order memorial trees or send flowers to the family in memory of David Rayburn, please visit our flower store.