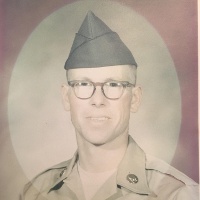 Mr. Daulph Phillip Barnes, age 70 of Holladay, TN. passed away on Monday, August 12, 2019 at his residence. Mr. Barnes was born on April 14, 1949 in Camden, TN. to the late James Loye Barnes and Violet Doherty Barnes. He was a chemical operator with DuPont, a member of Palestine United Methodist Church and a U.S. Army Vietnam Veteran.

Funeral services will be held on Thursday, August 15, 2019 at 4 pm at the Oakdale Funeral Home Chapel with Bro. Marty Arnold and Bro. Steve Douglas officiating. Burial will follow in the Liberty Cemetery in Holladay, TN.

To order memorial trees or send flowers to the family in memory of Daulph Phillip Barnes, please visit our flower store.