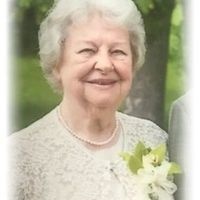 Mrs. Christine Clement Palmer, age 89 of Camden, TN went to be with Jesus on Monday, September 30, 2019 at her home in Camden surrounded by her family and friends.  Mrs. Palmer was born on August 29, 1930 in Big Sandy, TN to the late John Newel Clement and Berta Mae Warmack Clement. She was also preceded in death by her husband Eugene E. Palmer; brothers Jackie Clement and Jimmy Clement. She was a homemaker and member of the Church of God of Prophecy in Camden, TN. Christine’s love for her family and friends came second only to her love for Jesus Christ. She enjoyed spending time in her flower and vegetable gardens and would selflessly share goods from both with all.

Funeral Services will be held on Thursday, October 3, 2019 at 1 pm at the Oakdale Funeral Home Chapel with Bro. Troy Redman officiating. Burial will follow in the McRae’s Chapel Cemetery.

To order memorial trees or send flowers to the family in memory of Christine Palmer, please visit our flower store.