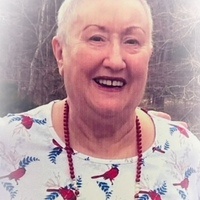 Betty Lou was born in Benton County but raised in Detroit, MI. She married young and was not only a homemaker
but also enjoyed a career in law enforcement. She retired from the Detroit Police Department and settled to
Benton County where she enjoyed being a doting grandmother, member of Grace Baptist Church and active
member of the Camden Genealogy Society. Throughout her life she enjoyed singing in the choir, traveling, jewelry
making, and spending time with family. She enjoyed a full life with her family and had a generous spirit.

Funeral Services to Celebrate the Life of Betty Lou will be on Saturday, February 26, 2022 at 2pm at Oakdale
Funeral Home on Hwy 641 in Camden, TN. Visitation with the family will be on Saturday, February 26, 2022 from
1:00-2:00 pm at Oakdale Funeral Home. The family is asking in lieu of Flowers to donate in Betty Lou Stehlik’s
name to the Foundation for Peripheral Neuropathy – foundationforpn.org – Although she didn’t succumb to the
disease, she suffered with it for decades.

To order memorial trees or send flowers to the family in memory of Betty Lou Stehlik, please visit our flower store.