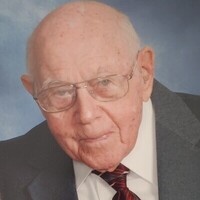 Arch Smith age 97 of Camden, TN passed away on Monday, August 17, 2020. He was born in Camden on June 6, 1923, to John C. Smith and Mary Askew Smith. Arch was preceded in death by his parents, by his brother Glindell, and by his sister Jetta. He served in the U.S Army during WWII from April 1943 until March 1946 in the battles of the Ardennes, the Rhineland, and others in the European Theater as part of the 565th Antiaircraft Battalion of Patton's 3rd Army.  He received a Good Conduct Award, a Victory Medal, an American Theater Ribbon, and a Driver/Mechanic Badge. He was always very proud of serving in Patton’s 3rd Army. In 1946 he returned home and married Edith D. Brown. Mr. Smith played an active role in Chalk Level Baptist Church and First Baptist Church of Camden, serving as a deacon in both churches. He retired from Tennessee Valley Authority. Mr. Smith was the 3rd generation owner of a Century Farm, dating back to 1886. He was the oldest Century Farm owner in Benton County.

He is survived by his wife of 74 years Edith D. Smith and the Smith family which includes son Stephen A. (Carol) Smith of Camden and daughter Judy C. (Randy) Hicks of Canton, GA.

A graveside service will be held on Saturday, August 22, 2020 at 11:00 am at Eastview Cemetery with Dwayne Hollingsworth officiating.

To order memorial trees or send flowers to the family in memory of Arch Smith, please visit our flower store.