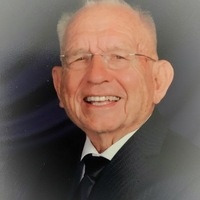 Alan Dean Presson passed away at his home in Paris, TN early Monday morning on September 5, 2022.  Born the 9th of 10 children to Herman and Flora Presson, he was married to Julia Flowers for 59 years.  He was a native of Camden, TN but touched lives in both Houston and Benton Counties as a coach and administrator.  Dean was a long-time Gideon speaker and believer in Jesus Christ - always encouraging his children and families to put Christ first in all their activities, thoughts, and plans.

Dean was an athlete and an avid sports fan.  During his time in the Air Force, he played center field for his baseball team competing in the Air Force World Series.  He was especially proud of his hitting ability.  During his time in junior college, he never swung the bat and missed a pitch, maintaining a batting average over .400.  His love of sports and competition continued throughout his life.

After serving in the Air Force for 4 years, he finished his education at Austin Peay where he obtained his bachelor’s degree and teaching certificate.  While teaching and coaching, he obtained a Master’s degree and Education Specialist degree.

Dean served in education his entire adult life.  After coaching at Camden Junior High, he was named basketball coach for both the high school girls and boys teams in Houston County as well as the football team.  He led the Fighting Irish to its first winning seasons, and his 1971 team was the first in school history to win a bowl game.  During his coaching tenure, he was instrumental in providing new opportunities for African American student athletes in his programs.  He cherished his lifelong relationships with so many of his players.

After coaching, Dean went on to be elected superintendent in 2 different counties - Houston and Benton.  He served 2 terms as superintendent in Benton County before finishing his career as supervisor of instruction.

Dean and Julia had 3 children:  Shane (Michelle), Deana (Tracy Willis), and Sherry (Randall Bowden).  They have 8 grandchildren..in order of appearance: through Deana (Heather, Trevor, and Stinson), through Shane (Sean, Canon, and Savannah), and through Sherry (Noah (deceased) and Ava).  There are 4 great grandchildren:  through Heather (Kaidan, Aiden, and Jonah) and through Trevor (Max).   Only 2 of his siblings remain: Cynthia Hewgley and Carol Page.

Dean lived 84 years.  At the end, he could still do hundreds of pushups and lots of pull-ups too.  He loved the Yankees.  He was sharp with cards and chess.  He could explain the intricacies of the single wing in football.  He could always hit a baseball.  He lived a remarkable life.  He lives with Our Savior now.  We will miss him!

Celebration of Life will be Wednesday, September 7, 2022 at 3:00 pm at Oakdale Funeral Home Chapel with Bro. Russell Ragsdale officiating. Burial will follow in Cowell’s Chapel Cemetery.

In lieu of flowers the family request you make a donation to the American Heart Association, Cowells Chapel Cemetery or Liberty Cemetery.

To order memorial trees or send flowers to the family in memory of Alan Dean Presson, please visit our flower store.