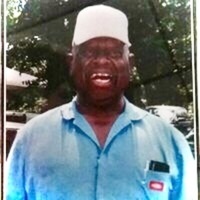 Mr. James Franklin Jennings, age 91 of Holladay, TN, departed this life on Saturday, October 24, 2020 at Camden Healthcare and Rehabilitations Center.  Mr. Jennings was born on July 7, 1929 in Benton County to the late T. R. and Birdie Jennings of Holladay, TN. He was the last member, Sunday school teacher and treasurer, at Friendship CME Church. He was also a Mason. He is the last and oldest living Jennings. He was also preceded in death by brothers: Vernell Bates, Vernon Bates, and C G Jennings, sister: Lorraine Menzies and first wife: Vernie Menzies Jennings.

A host of nieces and nephews

Funeral services will be held on Thursday, October 29, 2020 at 2 pm at Oakdale Funeral Home in Camden, TN.

Visitation with the Jennings family will be held on Thursday, October 29, 2020 from 11 AM-2 PM at Oakdale Funeral Home. Interment will be at Friendship CME Cemetery in Holladay, TN.

To order memorial trees or send flowers to the family in memory of James Franklin Jennings, please visit our flower store.